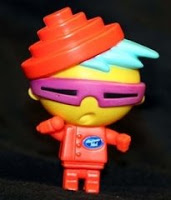 Devo To McDonald’s: Whip It (Out) Devo wants McDonald’s to whip it out and pay them for appropriating their iconic flowerpot hat costume for a Happy Meal toy.

The U.S. rock band Devo is suing McDonald’s over the New Wave Nigel toy the restaurant chain is including in its Happy Meals. The New York Post said the new wave band, whose song “Whip It” was one of the most popular songs of the 1980s, is suing for copyright infringement because the “American Idol”-themed Happy Meal character is dressed in a costume, similar to the ones Devo wore on stage, and plays music much like the group’s. “This New Wave Nigel doll that they’ve created is just a complete Devo rip-off,” the Post quotes Devo member Gerald Casale as saying. Casale added that McDonald’s did not reach out to the band before distributing the toys.

When a problem comes along, you must sue them.

Previous Obama On The Dignity Of Work
Next Rubyfruit To Close