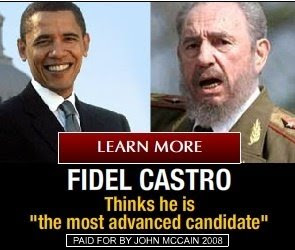 More dumbassery from the McCain camp as they pander to Florida’s powerful Cuban vote. The truth is, there’s no love between Obama and Castro.

The Castro advertisement actually uses the foreign leader’s words against Obama. But the quote is misleading in regards to the actual political dynamics in play. For starters, since Obama became the de facto nominee, Castro has been critical of his candidacy, arguing that he has not called for serious alterations to U.S.-Cuban relations and would willingly allow the island nation to suffer from hunger. Obama, meanwhile, has criticized Castro as a repeated abuser of human rights and a tyrant whose time has passed.