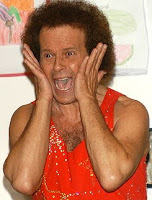 Last week after testifying before Congress on the the issues of childhood obesity and exercise, Richard Simmons mused about his interest in running for national office.

“I want to have the respect of a Congressman, I want to talk like a Congressman, and maybe, someday, I’ll be a Congressman.” Then, answering about three minutes of follow-up questions, Simmons adopted a politician’s rhetoric to address the press. Simmons said at one point that he would be available for the people. “However I can be of use,” he said, “If my country wants me, I’ll be there for my country.”

Using professional wrestler turned Minnesota Governor Jesse Ventura as an example of a celebrity figure who successfully transitioned to a politician, Simmons said he’s not ruling the idea of running for Congress out. Simmons closed the hearing by saying he would defer to his advisers to determine how to proceed. “After this Congressional hearing, I will go home,” Simmons said, “I will talk with my Dalmatian dogs, I will pray to God and then I’ll see what else I can do to help.”

You know, I think having an actual clown like Simmons in Congress could be a lot of fun. He could show all those unintentional clowns how to be funny on purpose.