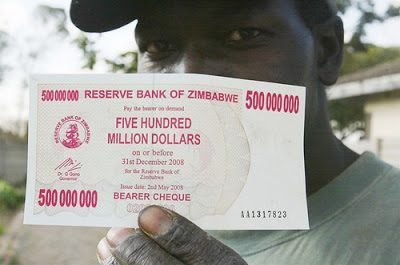 Brother, Can You Spare A Billion? Thanks to dictator Robert Mugabe’s fubar regime, hyperinflation in Zimbabwe has forced the government to cease printing their $500M notes (above) and switch to $25 and $50 billion Zimbabwean dollar notes. The price of a newspaper in Zimbabwe is now $25B ZD. At the time of yesterday’s above-linked story, a beer in a Zimbabwean bar was $150B ZD, or $6 USD. But by the time you read this, that beer will probably cost $50 billion more.

The madness, however, may end very soon. The German company that provides the paper to print the bills has suspended sales due to Mugabe’s fraudulent election last month. What happens after the government can longer print the increasingly worthless bills? A barter economy? Revolution? Both, probably.