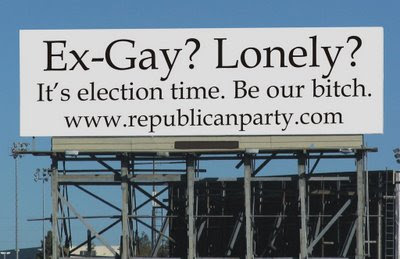 The wacky sad deluded “ex-gays” are having a conference in Orlando this weekend and have peppered the city with their dumbass billboards. (But this one is a parody done for this blog a couple of years ago by musical theatre star Steve Schalchlin.) Hey, why did the “ex-gays” pick the same weekend as Gay Days at Disney World? Hmmm. Anti-“ex-gay” activist Wayne Besen and his crew are down there.

Gay activists and clergy are planning a silent protest Saturday morning outside a conference of ex-gays who contend homosexuality can be cured by religious counseling. The conference, called “Love Won Out” and sponsored by the conservative Colorado-based Christian organization Focus on the Family, has sparked controversy and outrage with several billboards in Orlando and other cities that host the traveling event. The billboards declare: “I Questioned Homosexuality and discovered love won out.” The group’s message is that change is possible.

Protesters, organized by Parents, Families & Friends of Lesbians and Gays, will meet outside First Presbyterian Church in Orlando, where organizers say the conference is expected to draw about 500 participants. The conference coincides with Gay Days, which annually attracts thousands of gays to Orlando and Disney World.

Earlier in the week, leaders of Orlando’s gay community denounced the conference and the billboards as part of the larger agenda by Christian groups to deny gays rights — including same-sex marriage — and portray gays and lesbians as deviant and abnormal. Before Orlando, Love Won Out had erected the controversial billboards in eight cities. In some cities, the billboards have been vandalized.

You know at least half of these guys are going to slip away to the host hotels for a little poolside action.