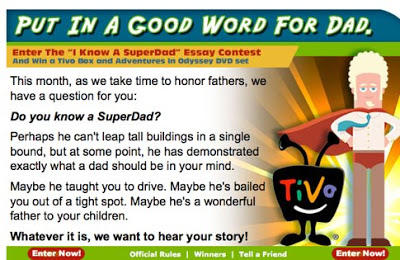 In the most bizarre promotional pairing in recent memory, Tivo has apparently partnered with rabidly anti-gay group Focus On The Family for a Father’s Day contest. Jeremy at Good As You opines:

Okay, so what we have here is a group that fights day and night against gay fathers teaming with a national brand on a contest honoring dads. Tivo is sidling up next to a group that propagates mean-spirited discrimination against an entire population sect! And while the vast majority of entries that will be received in this “SuperDad” contest will surely be from well-intetioned kids who want nothing more than to honor their pops, that’s not going to change the fact that the organization that’s fueling this whole thing is working for a world that keeps queer fathers and sons less-than-equal. We have a tough time remaining silent when we see a company getting in bed with that!

Jeremy points out that this may not be the first time that Tivo has gotten in bed with Focus On The Hate.

I’ve just had a conversation with the media contact person at Tivo and she was unaware of the promotion. Saying she is unable to speak for Tivo on this issue, she has promised to investigate and get back to me with a statement. Stand by. It’s entirely possible that Focus On The Family has launched this contest without Tivo’s knowledge or their permission to use their logo. Let’s hope so.

UPDATE: I had another chat with Tivo and they have emailed me the following:

TiVo’s popular KidZone feature has been recognized by many organizations as a great way to protect children from mature programming. Focus on the Family is one such organization that is leveraging the benefits of KidZone for an affiliate promotion of their of own their own design – in this case a Father’s Day contest.

On the phone just now, their rep stressed to me that Tivo has supported various LGBT groups in the past and that this promotion is just one of many that highlights their KidZone feature. There is an apparent relationship between Tivo and FOTF, even if the haters designed the contest on their own.

My name is Jennifer Chrisler. I am the Executive Director of Family Equality Council, the national organization working to ensure equality for lesbian, gay, bisexual and transgender (LGBT) families by building community, changing hearts and minds, and advancing social justice for all families.

On behalf of LGBT families everywhere, I am incredibly disappointed to see that TiVo, a national corporation providing entertainment services to millions of families in this country, has decided to sponsor and endorse the “I Know a SuperDad Essay Contest” with Focus on the Family.

Focus on the Family is widely known as one of the largest right wing organizations in the United States. People for the American Way remind us that, in particular, “Focus on the Family works against ‘special rights’ for homosexuals and hate crime legislation, and supports ‘reparative therapy’ for homosexuality, which has been widely discredited and rejected by the vast majority of doctors and physicians.”

Additionally, Focus on the Family’s leader, James Dobson, routinely makes false claims about gay and lesbian parents. In his 2004 book Marriage Under Fire, Dobson wrote that “[m]ore than ten thousand studies” support mom-dad families as the best for children, an assertion now widely debunked both by Dobson’s lack of citation and the fact that LGBT families can show 30 years of scientifically valid research demonstrating that our children do just as well as children raised by heterosexual parents in all key areas of childhood development (see www.familyequality.org/resources/research).

Dobson has also made such outrageous and offensive statements as: Same-sex marriage would lead to “marriage between daddies and little girls.between a man and his donkey,” as well as the destruction of the family and Western civilization entirely.

Aligning yourselves with Focus on the Family for the “I Know a SuperDad Essay Contest” sends the message that you support anti-LGBT politics and the hate speech Focus on the Family regularly spreads. It furthermore says to the millions of LGBT parents, their family members and friends in this country that you do not think gay dads can be “Super Dads,” an assertion we know from the very real experiences of our lives to be completely untrue.

I encourage you to recant your support of this contest, and want to inform you that despite the exclusive nature of this contest gay dads, their children and family members who love them from around the country will be submitting their nominations regardless of Focus on the Family’s disavowal of their worth.

That being said, I am happy to meet with you in person to discuss this issue and share with you real facts about LGBT parents. Our families want what all other families want. Our parents are just as “super” as any other.

Thank you for your time and consideration. I, and the millions of LGBT families and supporters nationwide, look forward to your response.

Previous Lesbians Tossed From Seattle Mariners Game For Kissing
Next McCain: Charlie Crist Has The Experience To Be Vice President