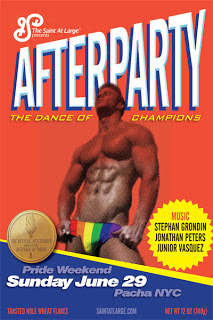 The Saint At Large, gaydom’s premiere dance party for over 28 years, presents CHAMPIONS – The Official Afterparty for Dance on the Pier. Heritage of Pride, the non-profit organization founded to produce New York City’s Gay Pride events including The Rally, The March, Pridefest, Dance on the Pier (for men) and Rapture on the River (for women), will benefit from the proceeds.

Due to the overwhelming praise lavished on the DJ talent introduced at this year’s Black Party, The Saint At Large is pleased to announce the return of both Stephan Grondin and Jonathan Peters who will join living legend Junior Vasquez to round out the Pride Afterparty musical lineup. The theme of ‘CHAMPIONS’ was chosen to pay respects to the 2008 Olympic Games and because everyone in the gay community is a champion during Pride.

As a special bonus, today’s winner will also receive the two disc CD set, Music Of The Saint: 1980-1988, just released the celebrate to 20th anniversary of the closing party of the original Saint. You can listen to streaming DJ sets from past Saint parties here. Tickets to the Champions party are $50 advance, $60 at the door. Advance tickets are available online or at four retail locations in Manhattan.

Enter to win the Champions tickets and Music Of The Saint CDs by commenting on this post. Only comment once and remember to leave an email address that you check frequently. The winner may transfer the prizes to another person if unable to be in New York City for the party. Publicists: if you’d like to take part in Swag Tuesday on JMG, please email me.