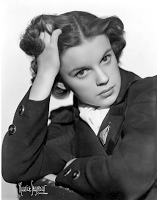 If you’re looking for the absolutely gayest thing to do this Pride season, get this:

It turns out the immortal Judy Garland never really croaked (but please don’t tell that to the gays who rioted all those years ago at Stonewall, making history partly because they were pissed that Dorothy from The Wizard of Oz was gone. They’ll feel used.) On June 28, Judy Garland in Concert will premiere in Boston, and as the release informs me, “This is not a tribute show. This is not a Garland lookalike. This is Judy herself returning to the stage for the first time in 40 years—singing the great American songbook with America’s greatest orchestra, The Boston Pops.

“Cutting-edge technology unavailable just a few years ago has enabled NY-based production company Running Subway to present Judy’s larger-than-life passion and personal story to 21st century audiences in what can only be described as the greatest Judy Garland concert ever.”

This sounds absolutely amazing—but I bet she’s still as drunk as a sailor on leave!

Get your tickets here. I wonder if she’ll take requests?

Previous Spin Rage
Next More On The “Don’t Sue” Memo