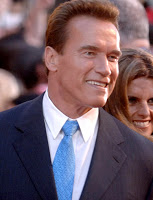 Schwarzenegger On Meet The Press MR. BROKAW: You have a lot of propositions on the ballot again this fall. One of them would mean a constitutional ban on gay marriages. Do you support that?

GOV. SCHWARZENEGGER: No, not at all. As a matter of fact, I think the Supreme Court made a decision there. It was apparently unconstitutional to stop anyone from getting married. It’s like 1948, the interracial marriage, when the Supreme Court of California has, you know, decided it was unconstitutional and then later on the Supreme Court of the United States followed, I think 10 or 12 years later. So I think it is, it’s good that California lead–is leading in this way. I personally believe that marriage should be between a man and a woman. But at the same time I think that my, you know, belief, I don’t want to force on anyone else, so I think we should stay with the decision of the Supreme Court and move forward. There are so many other more important issues that we have to address in California. So I think to spend any time on this initiative I think is a waste of time.

It’s just so interesting that a die-hard Republican and McCain supporter like the Governator would come out in support of marriage equality. It’s been, what, a month since he first did so? I still kinda can’t get over it.

Previous Gay Marriage Back On AZ Ballot
Next NRA: We Need More Guns In The Projects