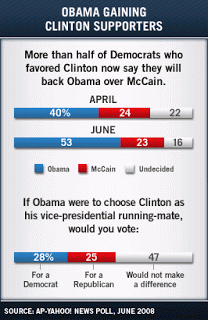 Steve Ralls at Huffington Post reports on the latest poll of Hillary supporters.

A poll released this afternoon, examining the seemingly ever-shifting loyalties of Senator Hillary Clinton’s presidential supporters (of which I have been an enthusiastic one), finds that, while 53% of Clinton’s backers are now firmly on-board with Senator Barack Obama’s White House bid, there are some who are simply incorrigible… and, increasingly, intolerable to the ears.

While it would be admirable for any voter to decide their campaign allegiance, and their vote, on honest ideological differences with a particular candidate, the resistance among some Clinton supporters to Obama’s campaign is rooted, instead, in half-truths, no-truths and flat-out ignorance about who Senator Obama is and what his campaign stands for.

In a country where we have paid a too-heavy price for electing the ideal drinking buddy rather than real, competent leaders, we have now devolved to “name games” in our quest to fill the world’s most important job.

Barack Obama “sounds to me like a Middle Eastern type of name and whether or not he’s born here in the United States, he doesn’t seem like, to me, somebody who is trustworthy,” Kristie Hartle told the AP pollsters. “You can’t trust anybody these days, so who’s to say he’s not a terrorist and we just don’t realize it yet?”

Apparently, you can’t trust somebody with a name like Kristie Hartle to make a rational, informed decision before she goes to the polls, either. Has Ms. Hartle talked to the soldiers in Iraq? Would they rather continue the quagmire in the desert under a commander named John than come home under one named Barack?

Are Americans really going to be comfortable with an economy running on empty if it’s under the direction of a president named McCain? While they may seem to think so, the truth is that the answer is “no.”

“When asked an open-ended question about the first words that come to mind about Obama, some former Clinton supporters used words like Muslim or terrorist,” AP reports. And yet, “An analysis of Clinton supporters who are backing McCain shows they are more liberal than the Arizona senator on the issues. The majority favor removing troops from Iraq as soon as possible, a single-payer health care system funded by taxpayers and repeal of Bush’s tax cuts for the wealthy.”

And these are Democrats?