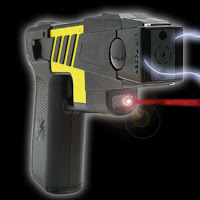 The NYPD is considering equipping all cops with Tasers. However:

Four days before a consultant suggested the NYPD expand its use of Tasers, the country’s biggest stun gun manufacturer was hit with a $6 million verdict for the death of a California man. A federal jury found that Arizona-based Taser International should have better warned Salinas, Calif., police that the weapon’s shocks were potentially dangerous.

The jury held Salinas police financially blameless in the death of a 40-year-old drug user whose enlarged heart gave out after repeated shocks. Just Tuesday, Suffolk County cops reported that a 26-year-old man died Monday after being shocked twice with a Taser while trying to swallow a bag of cocaine.

Such deaths are why the American Civil Liberties Union and Amnesty International USA have called for a moratorium on Tasers, and why Rand Corp. recommended that the NYPD try a pilot program to test wider use.

Retired NYPD Lt. Alexander Lombard is one of those who say some cops authorized to carry the Tasers misuse them. Lombard’s son Alexander 3rd, 18, was Tasered four times and hit with a nightstick when cops responded to a disturbance at a Harlem barbecue last August, according to the teen’s lawsuit against the city. NYPD officials declined to comment.

The NYPD has about 500 Tasers in use, assigned to supervisors and specially trained Emergency Service Unit officers. A pilot program would put Tasers on the hips of rank-and-file cops in targeted police precincts, and results would be monitored. Rand Corp. estimated that 25 of the 455 police-related shootings it reviewed might have been prevented if cops had Tasers.

I think I’d side with Amnesty International and the ACLU before the NYPD.