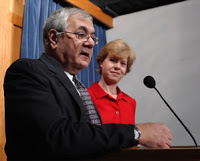 The group, called the LGBT Equality Caucus, has received the support of 50 other members of the House, most of them from California, New York and the Northeast. None of Wisconsin’s seven other House members has joined the caucus.

Baldwin said she hopes to use the caucus, formed to advocate for lesbian, gay, bisexual and transgender Americans, to inform other lawmakers about issues important to those communities. “Corporate America and the American people are far ahead of where Congress is right now,” she said. She also sees the caucus as a way for lawmakers to begin “building for the future” once a new administration is in place after the November election.

All of the caucus members are Democrats except Reps. Chris Shays of Connecticut and Ileana Ros-Lehtinen of Florida. “This has not been part of the Republican agenda,” Shays said. He added that he thinks advancing rights for all Americans is a matter of honor.

The idea for the caucus came about after Democrats took control of Congress and California Rep. Nancy Pelosi, who supports gay rights, became House speaker, Frank said. Before that, those who supported gay rights had focused most of their efforts on fighting proposals to diminish rights for gays and lesbians, Frank said. Now, he said, he and Baldwin are working together to act on Pelosi’s commitment to helping gay people live and work free of discrimination.

But no Senate caucus yet, and none on the horizon with Ted Kennedy out of the picture, at least for now.