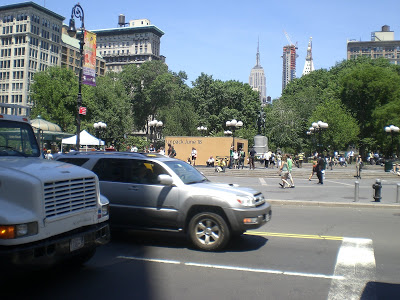 That giant packing crate in the middle of Union Square is actually a walk-in advertisement for the new (America’s! Largest!) Ikea that opens in Brooklyn’s Red Hook nabe today – much to the endless quivering coverage of NYC blogs and news outlets. “It’s rampant gentrification!” “We need the jobs!” “But what about the traffic?!” “Fuck that, I want a cheap-ass sofa!” (Speaking of which, people have been lining up since Sunday outside the store in the hopes of being one of the first 100 customers who will get a free couch. I’d rather narfle the Garthok, but whatevs.)

You can get to the new Ikea via their transfer buses which will pick you up from the closest subway stop, or you can take their free ferry from downtown Manhattan. Seems like just as long a trip as taking their free bus from the Port Authority to the store by the Newark airport – which I’ve done twice. Ugh. (But I dig my cheap-ass desk.)