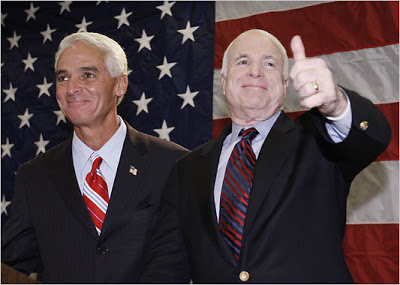 McCain: Charlie Crist Has The Experience To Be Vice President Via the St. Petersburg Times:

Charlie Crist may not yet have a full gubernatorial term under his belt, but Sen. John McCain said Wednesday Crist has enough experience to be vice president. “Oh, I am sure that in many respects Charlie Crist is qualified. He’s had other offices. As we know, he was attorney general as well. This is a big and diverse state,” McCain said in an interview Wednesday evening before a $1,000-per-person private fundraising reception.

“But we haven’t moved anywhere on the process that he would be under,” the presumptive Republican presidential nominee stressed. “We have a large number of people that we are considering, but I just don’t mention anybody’s name because then it starts a process that could end up in an invasion of their privacy.”