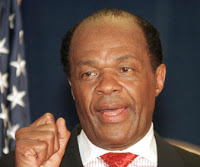 Former mayor and current Washington DC City Councilman Marion Barry has come out in favor of gay marriage there.

D.C. Council Member Marion Barry said that he would vote for a bill legalizing same-sex marriage in the city, if such a measure is introduced. It’s the first time the former mayor has publicly revealed his position on a marriage bill. His remarks came on June 18 at a meeting of the Gertrude Stein Democratic Club, Washington’s largest gay political group, Until the Stein Club’s meeting last week, Barry had declined to say whether he would support legislation to legalize same-sex marriage. In response to a question at the meeting, Barry said, “I don’t think you should make that question a litmus test. But if a bill like that were to come up, I would vote for it.”

Although Barry’s turbulent four terms as DC mayor have arguably marked him forever as the most infamous big city mayor in American history, he was an early and ardent supporter of LGBT rights going back to the 1970’s. Besides, bitch set him up!

Previous Caption This
Next Civil Partnerships For Ireland