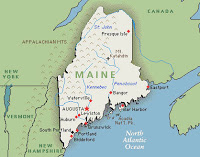 Another one for the win column!

A conservative Christian group has given up its attempt to mount a referendum drive to wipe out all protections for LGBT citizens in Maine. The Christian Civic League of Maine in an e-mail to its supporters said that it was giving up because it has “neither enough funds nor enough volunteer support to continue the effort.”

The group would have had to collect more than 55,000 signatures by next January to place its proposal on the statewide ballot in November 2009. Thursday the organization conceded it has collected only about 5,000 signatures.

The proposal would have banned same-sex marriage and civil unions, wipe out existing laws giving limited rights to gay and lesbian couples, removed LGBT protections under the state’s Human Rights Act, and would remove funding from the Attorney General’s Office to investigate discrimination claims.

Previous HomoQuotable – Will Bower
Next Impatient With Bush, Israel Decides To End World On Its Own