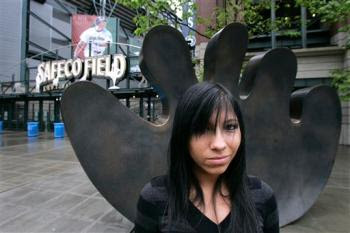 A former contestant on MTV’s A Shot Of Love With Tila Tequila and her girlfriend were asked to leave Seattle’s Safeco Field after a fan complained about them sharing a kiss.

Anyone who has attended a Major League Baseball game in the past decade has probably seen a “Kiss Cam” where couples throughout the ballpark are featured locking lips on the big-screen JumboTrons. But controversy over ballpark kissing erupted at Safeco Field in Seattle this week when a same-sex couple claimed they were discriminated against because of their sexual orientation, which stadium officials deny.

Sirbrina Guerrero, 23, says she and her partner, who requested anonymity, were just “exchanging pecks,” not acting any differently than heterosexual couples at the game, when park officials told them to stop “making out” or leave the facility.

“We were acting the same as any other dates that were out there, except we were a lesbian couple,” she said. “When you bring a date to a game, you kiss once in a while. But it’s not like we were making out. We were just kissing as regular couples do. I would never make out with anyone at a baseball game.”

On Monday, Mariners spokeswoman Rebecca Hale said that the club is investigating but that the usher was responding to a complaint of two women “making out” and “groping” in the stands. “We have a strict non-discrimination policy at the Seattle Mariners and at Safeco Field, and when we do enforce the code of conduct it is based on behavior, not on the identity of those involved,” Hale said.

The code of conduct – announced before each game – specifically mentions public displays of affection that are “not appropriate in a public, family setting.” Hale said those standards are based on what a “reasonable person” would find inappropriate. Guerrero denied she and her date were groping each other, saying that along with eating garlic fries, they were giving each other brief kisses.

On Tuesday, Guerrero said a Mariners director of guest services had apologized to her. The team spokeswoman could not immediately confirm that. After the story broke, the Mariners were blasted by the sex-advice columnist Dan Savage, who wrote about the incident on the blog of the Stranger, an alternative weekly paper. “I constantly see people making out,” Savage said. “My son has noticed and asked, `Do they show the ballgame on women’s foreheads?'” Savage called for a “kiss-in” to protest against the Mariners.

It was a woman who made the initial complaint against the couple. I imagine that if these women had been featured on the “Kiss Cam”, there would have been a roar of approval from the male audience in the stadium.