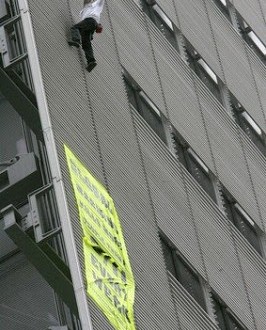 A little excitement in midtown today:

A French stunt man known as Spiderman used only his bare hands to scale his way to the top of the 52-story New York Times building in Midtown before being apprehended by authorities around 12:20.

Alain Robert, 46, who has scaled the Eiffel Tower among other towering structures, got a boost from 10 cohorts who began handing out flyers, asking passersby to stand back and to speak out against global warming. Pedestrians and construction workers alike cheered and gasped as Robert made his way to the top of the north side of the building where authorities cordoned off the base.

“It was free entertainment, and the crowd loved it,” said Tomas, 23, of Coop City, who watched the spectacle for more than an hour. “He was trying to make a point but it’s not the way to do it. It got the crowd¹s attention, but it’s a little risky.”

The France native swiftly ascended the building, and a third of the way up unfurled a bright yellow banner that read “Global Warming kills more people than 9/11 every week.” The rest of the way, he paused to rest or wave to onlookers.

The tourists were thrilled, but the dozens of cops and firemen who had to respond and prepare to rappel down the building from the top in case they needed to rescue Spider-Dork, not so much. The exterior lattice-work of the NY Times Building is nothing if not a 52-story ladder, so color me unimpressed. I was amused, however, by the breathless live report on NBC4 that gushed that Spider-Dork had climbed “5000 feet.” Uh, what would that be? 300 stories? 400 stories?

UPDATE: A copycat is doing the same thing. As of now, he’s 30 stories up. It’s the latest fad! See you at the top!

Previous McCain: Charlie Crist Has The Experience To Be Vice President
Next And Then There Were None