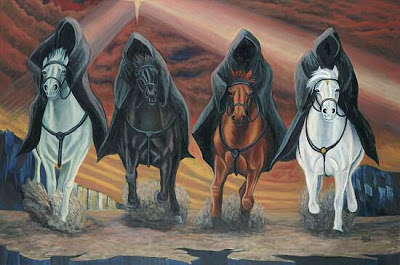 Impatient With Bush, Israel Decides To End World On Its Own Saddle them horsemen up.

Israel carried out a major military exercise earlier this month that American officials say appeared to be a rehearsal for a potential bombing attack on Iran’s nuclear facilities. Several American officials said the Israeli exercise appeared to be an effort to develop the military’s capacity to carry out long-range strikes and to demonstrate the seriousness with which Israel views Iran’s nuclear program.

More than 100 Israeli F-16 and F-15 fighters participated in the maneuvers, which were carried out over the eastern Mediterranean and over Greece during the first week of June, American officials said.

The exercise also included Israeli helicopters that could be used to rescue downed pilots. The helicopters and refueling tankers flew more than 900 miles, which is about the same distance between Israel and Iran’s uranium enrichment plant at Natanz, American officials said.

Israeli officials declined to discuss the details of the exercise. A spokesman for the Israeli military would say only that the country’s air force “regularly trains for various missions in order to confront and meet the challenges posed by the threats facing Israel.”

Once the war with Iran starts, there may be a slight ringing in your ears. Fortunately, you’ll be nowhere near them.