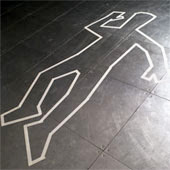 The 2007 murder stats have been compiled and once again New York City has the lowest homicide rate of the 25 biggest cities in the nation.

New York’s safe, but not this safe: There are nine big cities in the United States where not a single murder occurred last year. Ann Arbor, Mich.; Cambridge, Mass.; and Provo, Utah; are among the kill-free zones, FBI crime stats for 2007 show. Bellevue, Wash.; Costa Mesa, Daly City and Huntington Beach, Calif.; Pembroke Pines, Fla.; and Westminster, Colo., round out the cities with populations of at least 100,000 that had no murders in 2007.

New York ranked 129th out of the nation’s 251 cities with populations of more than 100,000. “The numbers continue to go in the right direction, and it’s because of the impressive efforts of the men and women of the NYPD, as well as our innovative policing strategies and efforts to keep illegal guns out of the hands of criminals,” Mayor Bloomberg said.

If I read that right, you’re about 20 times more likely to be murdered in New Orleans than in NYC. And it’s interesting that Pembroke Pines, Florida is listed as one of the nine “big” cities with no murders in 2007. I lived in Pembroke Pines for a couple of my Fort Lauderdale years and always thought of it as more of a Lauderdale neighborhood than as a “big city” of its own.