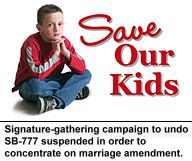 Fundies Give Up SB 777 Repeal The wingnut failures are coming almost daily lately. Save California, the right-wing group attempting to repeal California’s anti-bullying legislation, SB 777, has announced that they are giving up in order to concentrate on fighting gay marriage.

In a June 21 email to supporters, Karen England of the Save Our Kids Campaign, the organization pushing the initiative, said the group has decided to concentrate instead on passing the so-called Marriage Amendment, which would enshrine in the state’s constitution the definition of marriage as being between one man and one woman.

“Since the start of the Save Our Kids initiative campaign, the political landscape in California has shifted significantly,” said England in the email. “The California Supreme Court’s decision redefining marriage has turned the state’s attention to the traditional marriage initiative on the November ballot. In the last month, our staff has worked overtime responding to the marriage decision and contemplating the future for traditional marriage in our state. After much prayer, consideration and consultation we have made the decision to suspend the Save Our Kids campaign to allow our staff and supporters to dedicate themselves to the Marriage amendment.”