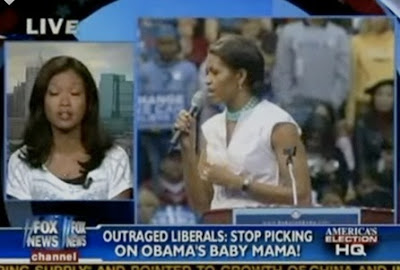 So here’s the thing (because during this campaign I’m apparently learning that we black people have our own secret code and hand signals so this stuff has to be explained like you are speaking to a child at times), using the phrase “baby mama” to describe this woman implies that like too many people in the black community, she is a mother on her own with no man around doing his job. Except, Barack and Michelle Obama are the exact opposite of this, and that is one of the reason America – especially black America – are so proud of them.

It’s high time that Fox News just stop with the pussyfooting around with these games and run the more direct “ni**er” on any Chyron running over video of the Obamas.

Fox News says a producer used “poor judgment” in writing the caption. For those who’ve been living under a rock during the hip-hop years, here’s how Urban Dictionary defines “baby mama”:

A term used to define an unmarried young woman (but can be a woman of any age) who has had a child. As mentioned before in another definition, most of the time it is used for when it was simply a sexual relationship, compared to ex-wife or girlfriend. Usually this has a negative connotation, a lot of baby mamas are seen as desperate, gold digging, emotionally starved, shady women who had a baby out of spite or to keep a man. Sometimes they may act like this because of missed child support payments, unfulfilled promises by the father, or convenient sex by the father. Either or both may exist in any situation.

The caption ran during an interview with the usually loathsome Michelle Malkin, who at least in this incident is distancing herself from the situation, saying, “I did not write the caption and I was not aware of it when it ran (the Baltimore studio doesn’t have a monitor). I don’t know if the caption writer was making a lame attempt to be hip, clueless about the original etymology of the phrase, or both.”