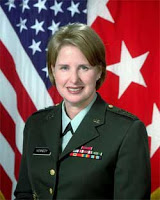 These “who’s the veep?” stories are coming fast and furious. Via Pink News:

The highest-ranking female officer in the history of the United States Army is a contender for the Democratic party’s Vice Presidential nomination. Lieutenant General Claudia J Kennedy, a retired three star general, has publicly supported campaigns to end the ban on openly gay, bisexual or lesbian people serving in the US Armed Forces.

While more than a dozen people are being considered as Barack Obama’s running mate, there is a core of his advisers that argue he should appoint a woman to assist him in retaining Democrats and Independents who supported Hillary Clinton’s candidacy.

Ms Kennedy, who served for more than 30 years, has a background in Army Intelligence. She served as an adviser to John Kerry during his unsuccessful bid for the Presidency in 2004 and endorsed Senator Clinton for President. Choosing her as the Vice Presidential nominee would help to counter the expected Republican focus on Senator Obama’s perceived lack of military and international experience.

It seems that Barack Obama is seriously considering asking Retired Army Lieutenant General Claudia Kennedy to be his running mate. Kennedy would obviously bring military experience to the ticket, foreign policy experience as well, and she is a supporter and friend of Hillary Clinton; all pros. The article points out that Kennedy is also an opponent of “Don’t Ask Don’t Tell,” which makes her quite loved by the LGBTQ community. Kennedy would make quite some sense indeed; it would also send a message to white woman that Obama realizes the importance of Hillary’s White House run for them, and it would counter some of the ‘no experience’ criticism used against Obama for months now. It’s an interesting pick; at first sight, there isn’t much to criticize about Kennedy… which probably means that Obama will not choose her of course. Why? Because that’s how Democrats work.

I’d never even heard of Kennedy until I read this story. But I like what I see. So far.