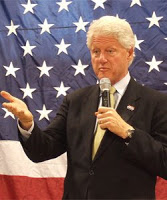 A new Vanity Fair article is ruffling feathers with statements implying that former President Bill Clinton has engaged in a series of extramarital affairs with high-profile women. The feature notes rumours of questionable relationships between Hillary Clinton’s husband and actress Gina Gershon and billionaire heiress Belinda Stronach, among others. In the Vanity Fair story, writer Todd S Purdum delves into what he calls Clinton’s “post-White House escapades, from the dubious (and secretive) business associations… to the private-jetting around with a skirt-chasing, scandal-tinges posse.” Purdum claims Clinton’s “episodic friendship” with billionaire auto-parts heiress and Canadian Parliament member Belinda Stronah has long served as fuel for tabloid rumours. More recently, “high-end Hollywood dinner-party gossip” has linked the former President to actress Gina Gershon. In addition, Purdum says there has been talk of several other ‘female friends’ Clinton has been rumoured to be associating with. While Purdum states that “none of these wisps of smoke have produced a public fire£ yet, he says that at least one unidentified Clinton aide was worried enough about the rumours going around to stage an “intervention,” because he believed “Clinton was apparently seeing a lot of women on the road.” In a 2,476 word memo released on Sunday, Bill Clinton’s office vehemently attacked the Vanity Fair article’s commentary on his private relationships, his business connections and his health status.