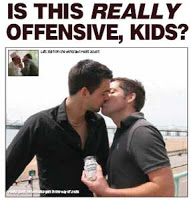 A British tabloid based in gay-friendly Brighton published a front page photo of two men kissing in a story attacking Heinz for pulling their now world famous mayonnaise ad.

“We were disgusted at Heinz for pulling their ‘gay kiss’ ad and for apologising so readily for their own ‘offensive’ imagery,” said Torsten Højer from One80news. “We just couldn’t believe that in 2008, the sight of two men affectionately kissing really offends that many people – so we thought we’d put an image of a gay kiss out there.

“It’s well-documented that familiarity can combat prejudice, and One80news is available throughout Brighton and Hove, in bars, cafes, shops, libraries and even leisure centres – and online. “The more people that see positive images of same-sex affection, the better.”

The newspaper reports that community leaders in gay-friendly Brighton and Hove are joining gay equality organisation Stonewall in condemning Heinz’s anti-gay decision to axe the advert. “This ad was imaginative and represents a massive leap forwards in that it dared to represent gay parents, say Phelim MacCafferty, LGBT spokesperson for the Brighton Green Party. “This cowardly withdrawal by Heinz reminds us that there are organised forces which have vested interests in keeping all LGBT people off the screens altogether.”

The paper is encouraging Brits to call Heinz and complain. It’s the story that will not die. I imagine that Heinz is not entirely unhappy.