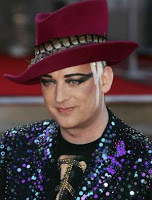 Boy George has been denied a U.S. visa and will not be able to conduct his planned tour or his free concert for the NYC Department of Sanitation.

His managers said in a statement Monday that the visa denial was not because of his past brush with the law in the U.S. but was because he is awaiting trial in London. The singer of such hits as “Do You Really Want to Hurt Me” and “Karma Chameleon” has pleaded not guilty to imprisoning a man at his London home. The U.S. Department of State says visa records are confidential so it can’t comment.

Boy George had this to say:

“I’m pretty devastated because I am so excited about this forthcoming tour and having my visa application denied seems unfair after I swept the streets of New York spotless. There are a number of public figures who are openly using drugs and they have no problem with immigration and I have seriously turned my life around and I feel great right now and this is just another reminder of how bad things were. I committed a crime and I happily paid the consequences and I should be allowed to move on and get on with what I do best and that is performing and making people people dance and cry!”

And now U.S. audiences won’t get to hear Yes, We Can, a tune inspired by Barack Obama.

“I was deeply moved and motivated by Obama’s ‘Yes We Can’ speech and I used it as a metaphor for personal change because there have been huge changes in my own life this past year. ‘Yes We Can’ equates as ‘Yes I Can’ from my own personal perspective and like many people I am excited by the prospect of Obama being the first black man in the White House and the next President of America. Most politicians fail to live up to the huge expectations we have for them but Obama exudes a sense of calm and after the stutterings of George Bush I feel he is just what America needs. I’m not too concerned about alienating Republicans because I’m pretty sure my audience is mostly Democratic!”

You can hear a snippet of Yes, We Can here. Sounds promising.

Previous Fundies Give Up SB 777 Repeal
Next HomoQuotable – Jonathan Rauch