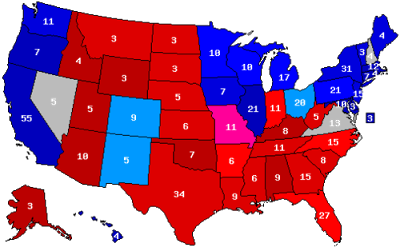 According to Intrade.com, an online futures trading (betting) site:

The electoral map is a forecast for the 2008 U.S. Presidential Election in which the presumptive nominees are Republican John McCain and Democrat Barack Obama. The electoral vote value for each state is shown, and the states are shaded according to the probability of a win.

The data for this map comes from the Intrade prediction market where there are real-money contracts for each individual state based on how it will award its 2008 electoral votes. Traders who predict the outcome correctly are rewarded with the money of those who don’t. For more information visit Intrade.com. This map is updated at least weekly.

If you play on the Intrade site, you can also bet on the price of gasoline, how bad the recession will get, and the date that the U.S. and Israel will launch a joint air strike against Iran. As far as the election, so far the bettors have Obama winning by 13 electoral votes.