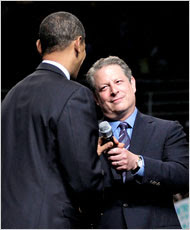 Al Gore Endorses Obama,
Is He A Veep Prospect? Former Vice President Al Gore made his debut appearance in the presidential campaign here Monday evening, offering a vigorous endorsement of Senator Barack Obama and urging Democrats to keep in mind the consequences of not taking the general election with grave seriousness.

“Looking back over the last eight years, I can tell you that we have already learned one important fact since the year 2000,” Mr. Gore said. “Take it from me, elections matter. If you think the next appointments to the Supreme Court are important, you know that elections matter.”

Mr. Gore and Mr. Obama strode onto the stage arm in arm to thundering applause from a crowd of nearly 20,000 people at a downtown arena. As Mr. Gore ticked through a long list of challenges facing the nation, he hailed Mr. Obama as “clearly the candidate best able to solve these problems and bring change to America.”

Mr. Gore had purposefully stayed on the sidelines during the long Democratic primary fight. He announced his endorsement of Mr. Obama a few hours earlier on Monday in a message to supporters on the former vice president’s vast e-mail list. Their appearance here touched off a flurry of curiosity among Democrats, with many quietly asking if Mr. Gore would be on Mr. Obama’s list of prospective running mates.

Previous Meet The Tyler-Olsons
Next The Hate Truck