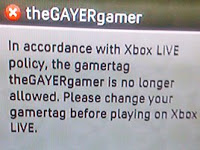 The online game site Xbox LIVE caused some controversy this week after telling a player that he could no longer use his screen name “theGAYERgamer”, saying that the player community found his user name offensive.

After receiving complaints, an Xbox rep explained the ruling on his blog:

We recieved [sic] a complaint on the Gamertag and determined that it did indeed contain sexual innuendo. Now granted, there could be an argument that the text is not pejorative to homosexuality and should therefore be allowed. But there is no context to explain that. Gamertags are visible to everyone and it would be hard for me to defend to a parent of a young child who saw it that the name did not contain content of a sexual nature.

We view these situations objectively during our review under the terms of use. To answer the question another way, yes “TheStraighterGamer” or “TheHeterosexualgamer” would have gotten the same treatment and would have been found to be in violation and forced to be changed. We’ve actually done that to tags like that before.

I can understand that if Xbox allowed screen names that reference sexuality, that could be used to insult gay players. But to say that a child shouldn’t see the word “gay” at all seems rather dumb.