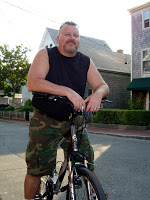 Here are some of our recent swag winners:

David (left) in Boston won the tickets to the Boy George concert at Terminal 5, saying, “Great excuse to get back to NYC after leaving the Bronx a year ago…thanks.”

Monique in Chicago won the tickets to the True Colors Tour, saying, “Suffice to say I’m SO excited to go to the Chicago show (even though it’s in the middle of my fucking midterm exams), and thank you.”