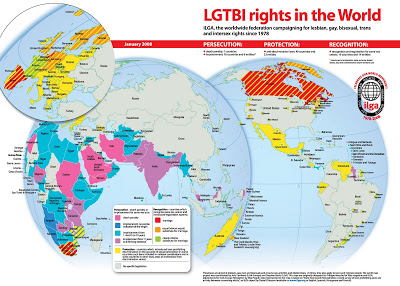 A new report from the ILGA has raised the number of countries that criminalize same-sex act to 86.

The International Lesbian and Gay Association’s 2008 report on state-sponsored homophobia says that being lesbian or gay is risking jail time in 86 countries and death penalty in seven. The figure normally quoted is 77 countries. The research deals only with legislation criminalising consensual sexual acts between persons of the same sex in private above the age of consent.

Laws dealing with such acts in public, with under aged people, with force or by any other reason are not included. In addition to those 86 countries there are six provinces or territorial units which also punish homosexuality with imprisonment, said ILGA. A 30-year-old world federation, ILGA consists of 670 lesbian, gay, bisexual, trans and intersex groups from more than 100 countries.

“Although many of the countries listed in the report do not systematically implement those laws, their mere existence reinforces a culture where a significant portion of the citizens needs to hide from the rest of the population out of fear,” said Rosanna Flamer-Caldera, co-secretary general of ILGA.

“A culture where hatred and violence are justified by the state and force people into invisibility or into denying who they truly are. Whether exported by colonial empires or the result of legislations culturally shaped by religious beliefs, if not deriving directly from a conservative interpretation of religious texts, homophobic laws are the fruit of a certain time and context in history. Homophobia is cultural. Homophobia, lesbophobia and transphobia are not inborn. People learn them as they grow.”

A map of the countries listed by the ILGA is above, but you might find the details hard to read even when you embiggen it.