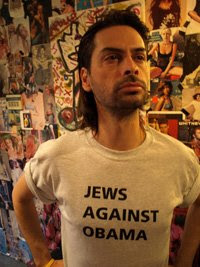 NYC-based fashion designer Doron Braunschtein has launched a line of “Jews Against Obama” shirts. From his press release:

“I am a true anti-Obama New York Jew. The word on the street is that New York Jews will vote for McCain anyhow. The majority of the Jews – at least the ones that are proud of their religion and practice it – like me, don’t want to see Obama- a man who’s middle name is Hussein, and his family from his Kenyan father’s side is Muslim, as the leader of this great country. More than that, after Obama’s pastor, Jeremiah Wright, honored Louis Farrakhan- definitely one of the most racist and anti-Semitic people alive – Obama lost us Jews totally. That made me start this political movement in the first place.”

According to Braunschtein, the shirts are doing “brisk business.”