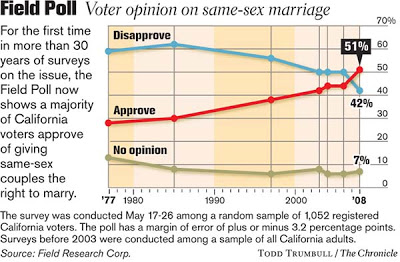 By a tiny margin, for the first time ever a majority of polled Californians say they now approve of gay marriage.

In a dramatic reversal of decades of public opinion, California voters agree by a slim majority that same-sex couples should be allowed to marry, according to a Field Poll released today.

By 51-42 percent, registered voters said they believed same-sex marriage should be legal in California. Only 28 percent favored gay marriage in 1977, when the Field Poll first asked that question, said Mark DiCamillo, the poll’s director. “This is a milestone in California,” he said. “You can’t downplay the importance of a change in an issue we’ve been tracking for 30 years.”

While opposition to same-sex marriage has been weakening for years in California, supporters have remained a minority. In March 2000, for example, voters overwhelmingly backed Proposition 22, a statute that said the state would recognize only the marriage of a man and a woman. A 2006 Field Poll showed that half the state’s voters still disapproved of same-sex marriage.

But the state Supreme Court’s decision this month to overturn Prop. 22 might have turned the tide, DiCamillo said. “There’s a certain validation when the state Supreme Court makes a ruling that you can’t discriminate when it comes to marriage,” he said. “That may have been enough to move some people who were on the fence about same-sex marriage.”

This bodes well for the November ballot measure, although once the wingnuts get their PR machine in gear, these warm fuzzies of the moment may dissipate.