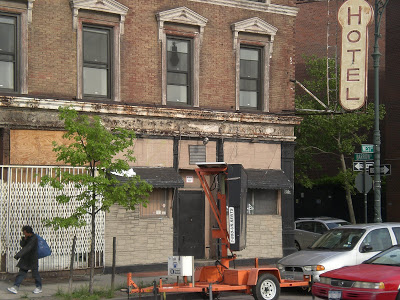 At the corner of Barrow and West in the West Village, the Keller Hotel opened in 1898 as lodging for sailors moored on Manhattan’s west side. Closed for almost a couple of decades, last year it was declared a landmark by the city in response to the “Campaign To Save The Far West Village.” The Keller is among over 100 west side properties owned by the late Richard Gottlieb, whose habit of never renovating his buildings is considered to have inadvertently aided preservation efforts.

A reader tipped me that this was the site of Keller’s Bar, reputed to have been NYC’s first leather bar. Image via History Of Gay Bars In NYC. My buddy Superdaddy Mark has a great remembrance of Keller’s on his blog. Here’s an excerpt:

It was a small, rather plain room, shaped like a shoebox. A door, with a window on each side. A rough wooden bar that ran the length of the room on the left. A pool table and jukebox on the right. A few strings of Christmas lights and dozens of handsome men crammed inside. The jukebox featured a mix of current soul and rock, along with the Ronettes singing “Walking In The Rain” and the Shirelles essaying “Chains”. Later “Shame, Shame, Shame” would play incessantly, as the patrons danced in place, and the bartender hollered in faux-annoyance.