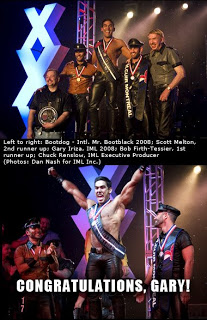 “The International Mr. Leather competition is purportedly the climax of the IML weekend. But this cowhide beauty pageant—which, at 3.5 hours, rivals the Oscars in terms of jaw-dropping self-regard—is interesting more as anthropology than as entertainment. (If you consider that the entire multi-hour event is underscored by a steady OON-cha-OON-cha-OON-cha house beat, punctuated with triumphalist theme music from “Gladiator,” you’ll understand why I had to go to the lobby at intermission to buy a handful of Excedrin.)

“The ceremony opened with a genial speech by IML founder Chuck Renslow, who set the tone for the evening by assuring us that “[Leather play is] still a power exchange. It’s still about trust and learning.” (Throughout Renslow’s speech, several guys in the audience actually said “Amen,” while others raised their hands as if in prayer, tent revival-style. Now that I think of it, the whole IML experience reminded me just a bit of my fundamentalist Promise Keepers days back in the mid-’90s. Except, of course, with less laying-on-of-hands and more fisting.)” – Examiner.com blogger Chris Jensen, describing his first IML. The 2008 IML winner is Gary Iriza of Palm Springs.

Previous Out Of State Gay Marriages To Stand In NY
Next New CA Poll: Majority Approve Marriage Equality For First Time Ever