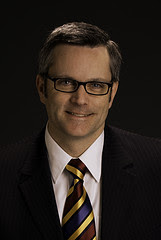 History was made yesterday when Portland, Oregon elected openly gay Commissioner Sam Adams, 44, as their new mayor, making Portland the largest American city ever to be helmed by an out gay man.

“I’m running not to be a gay mayor, but a great mayor,” he said after delivering his victory speech. “But I’m very cognizant, very aware that I’m the first openly gay mayor of a major American city. That’s a real honor.”

Former NYC mayor Ed Koch is in his early hundreds and he still hasn’t come out. His answer to the gay question remains, “Fuck off!” Congratulations to the people of Portland and Mayor Adams.