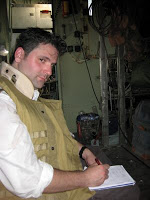 Last night NYC-based gay journo Michael Luongo won the Reporting Award at the Society for Professional Journalist’s New York Deadline Club Awards, for his November 2007 story Our Man In Baghdad, which was published in the Gay City News. The story focuses on the hidden gay life in Iraq, with Luongo meeting some of the hundreds of Iraqi men with Gaydar profiles, both to his and their great peril.

Judges called Luongo’s story “a riveting read”, saying the story “details the harrowing task of survival, not only in a war zone but also as an outsider in one’s own culture. A thorough, well-researched and compelling article on a most timely topic.”

I thought Luongo’s story was fantastic and by chance happened to get to tell him so on the day it was published. Go check it out.