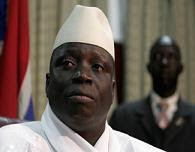 Gambian President Yahya Jammeh says he will ‘cut off the head’ of any homosexual caught in his country. Addressing supporters at the end of his meet the farmers tour Sunday, Jammeh also ordered any hotel or motel housing homosexuals to close down, adding that owners of such facilities would also be in trouble. He said the Gambia was a country of believers, indicating that no sinful and immoral act as homosexual would be tolerated in the country. He warned all homosexuals in the country to leave, noting that a legislation ‘stricter than those in Iran’ concerning the vice would be introduced soon.

Yammeh is BFFs with Iran’s president Mahmoud Ahmadinejad. Anybody remember when Jammeh gave the commencement address at St. Mary’s College of Maryland in 2004?