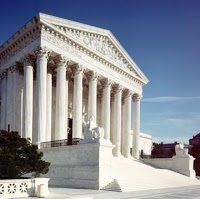 From the San Jose Mercury News:

It was 1964. Conservative groups across California, angered by a new law aimed at discriminatory housing practices, mobilized to wipe the law off the books by amending the state constitution.

The initiative was a hit at the ballot box. Two-thirds of the state’s voters approved the change in the constitution. But the new law didn’t stick – both the California Supreme Court and the U.S. Supreme Court struck it down, finding that it violated federal equal protection rights.

More than four decades later, that scenario could unfold again in California. This time, however, the issue is gay marriage, and California – because of its situation – may end up being the battleground that ultimately propels this modern day civil rights battle into the U.S. Supreme Court.

With social and religious conservatives moving to erase Thursday’s California Supreme Court decision to legalize gay marriage with a fall ballot initiative, California is in a unique position. While dozens of states have enacted gay-marriage bans, none has done so after a state Supreme Court found a legal right for gay couples to wed.

“We’d be in uncharted legal territory,” said Shannon Minter, legal director of the National Center for Lesbian Rights, a lead attorney in challenging the gay-marriage ban.

The story notes that with the current conservative makeup of the U.S. Supreme Court, gay marriage advocates would obviously face an “uphill battle” there.