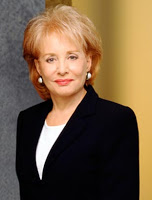 Barbara Walters: Why I Was Roy Cohn’s Beard In an interview promoting her new memoir, Audition, Barbara Walters tells the San Francisco Chronicle about her relationship with Roy Cohn, the most despised gay man in American history, explaining why she allowed Cohn to pose as her boyfriend.

Many of Walters’ other friends were horrified that she would even talk to Cohn, but what Walters reveals for the first time in “Audition” is that Cohn somehow got a warrant for her father’s arrest dismissed. He had failed to show up for a New York court date because the family was in Las Vegas at the time.

Cohn liked to hint that they were more than friends “because I was his claim to heterosexuality,” Walters says. “He never said that he was gay, he never admitted to me that he had AIDS. He was a very complicated man. He died, alone, up to his ears in debt. He had been disbarred and he was hated. And I might have thought the same way, but he did something when my father was in trouble, [and] I never forgot that.”

Loyalty, she says, means everything to her. “I still have many of the same friends I had when I was younger,” she says.

Did Cohn have a secret “nice” side?

Some background for the youngin’s who somehow may not know who Roy Cohn was:

When he was 24, as Assistant District Attorney of Manhattan, Cohn’s eviscerating questioning of nuclear scientists Ethel and Julius Rosenberg was widely credited with their espionage convictions. In his autobiography, Cohn claimed that the judge imposed the death penalty on the Rosenbergs on his recommendation. The actual guilt of the Rosenbergs (Ethel, in particular) remains a topic of great debate. Cohn’s performance in the trial led FBI director J. Edgar Hoover to recommend him to Sen. Joseph McCarthy.

As McCarthy’s chief counsel during the communist witch hunts of the 1950’s, Cohn and his boss called hundreds of government employees to testify before a Senate subcommittee on accusations of communism, espionage, and homosexuality. (That subcommittee continues to operate today as part of the Senate Committee On Homeland Security.) Thanks to Cohn’s vicious interrogations, many of these gay people lost their jobs, homes, and families. This was all done with Cohn’s purported lover G. David Schine, a handsome young lawyer, working at his side as an unpaid consultant. (Some historians say Cohn was merely infatuated with Schine and that they were not sexually involved.)

After Schine was drafted by the Army and was in danger of being sent to Korea, Cohn attempted to intervene and get Schine a safer assignment. He then accused the Army of holding Schine “hostage” unless Cohn ended his investigation of communist infiltration of the armed services. The hearings into Cohn’s allegations backfired (with Senators snickering that Schine was a “fairy”), resulting in Cohn’s resignation and McCarthy’s later censure by the Senate, effectively ending the witch hunts.

In his private practice over the next 30 years, during which he often defended mafia bosses, Cohn also lobbied strongly against homosexual rights, all while visiting gay clubs and chasing “muscle men.” One of his last acts was to work against NYC’s gay rights ordinance. Cohn’s death from AIDS in 1986 was immortalized by playwright Tony Kushner in his Pulitzer Prize and Tony Award winning play, Angels In America. (Cohn was also a character in Kushner’s lesser known play, G. David Schine In Hell.)

Previous to this revelation about his helping her father, Barbara Walters’ devotion to Roy Cohn had been explained as gratitude for his role in the adoption of her daughter. You have to wonder how Walters managed to have a such a successful career in journalism while being lifelong friends with such a famously evil person.