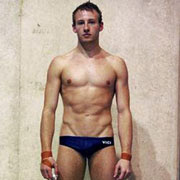 Australian diver Matthew Mitcham, 20, has come out in advance of competing in the Beijing Olympics.

Like many athletes around the world, Australian Matthew Mitcham fought his way to the top of his sport to qualify for the Beijing Olympic Games. Unlike many of his Olympic counterparts however, the diver must fight to bring his life partner with him to the Games.

Mitcham, 20, came out in an interview with the Sydney Morning Herald this Sunday. Now, he will compete on the 10-metre platform, diving for the gold as Australia’s only openly gay Olympic athlete.

What Mitcham would like more than anything else is for his longtime partner, Lachlan, who fought the tumultuous battle of Olympic dreams with Mitcham, to be there in the stands cheering him on. The young diver and his partner currently do not have the funds to get Lachlan to Beijing, but Mitcham tells the SMH that Johnson & Johnson offers an Athlete Support Programme that would allow for friends and family of those competing to travel to the competition.

Could we have another Greg Louganis here?