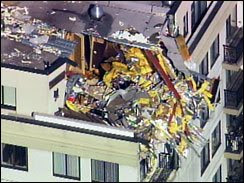 I cannot believe this. ANOTHER construction crane has collapsed on the Upper East Side, killing at least two people.

Two people died in a crane collapse on the Upper East Side of Manhattan Friday morning, according to the city’s fire department, reports WCBS-2 in New York.

The construction crane smashed into a high-rise apartment building before crashing more than a dozen stories onto the street below. The Fire Department said it has pulled people out of the wreckage at East 91st Street and First Avenue. Their conditions were not immediately known. The top floor of a nearby high-rise apartment building had been damaged. Firefighters and rescue workers were continuing to search through the wreckage. “This is totally mind blowing,” Manhattan borough President Scott Stringer told WCBS-2. “It looks like a bomb exploded in Manhattan. It’s just a total tragedy.” The accident happened 2½ months after a crane collapsed, killing seven people about two miles south.

What the fuck is going on in this town? First Avenue is covered with debris and rescue vehicles. After the March disaster, the city buildings commissioner resigned in disgrace and an inspector was arrested for falsifying inspection documents. Clearly, nothing has changed.