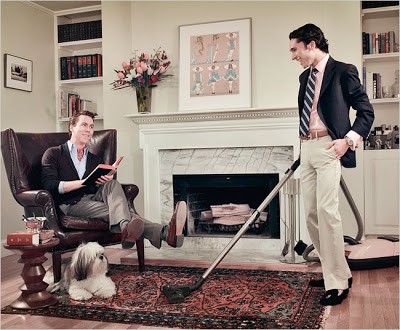 Captioned with photos that mock the misty 1950’s image of domestic bliss, the lengthy cover story in yesterday’s New York Times Magazine tells the story of several gay male couples in their 20’s who have married in Massachusetts since it became legal in 2004. The author, a young gay man himself, was bewildered when some of his peers started getting engaged:

I didn’t know what to make of these engagements — or of my subsequent discovery that more than 700 gay men 29 or younger had married in Massachusetts through last June, the latest date for which numbers are available. On the one hand, I wondered why these guys were marrying so young. What was the rush? It seemed to me that one of the few advantages of being young gay men — until gay marriage was legalized in Massachusetts, at least — was that we were institutionally protected from ever appearing on “Divorce Court.”

But I could also relate to young gay men yearning for companionship and emotional security. Had gay marriage been an option when I was 23 and recently out of the closet, I might very well have proposed to my first gay love. Like many gay men my age and older, I grew up believing that gay men in a happy long-term relationship was an oxymoron. (I entered high school in 1989, before gay teenagers started taking their boyfriends to the prom.) If I was lucky enough to find love, I thought, I’d better hold onto it. And part of me tried, but a bigger part of me wanted to pitch a tent in my favorite gay bar. I wasn’t alone. Everywhere I looked, gay men in their 20s — or, if they hadn’t come out until later, their 30s, 40s and 50s — seemed to be eschewing commitment in favor of the excitement promised by unabashedly sexualized urban gay communities. There was a reason, of course, why so many gay men my age and older seemed intent on living a protracted adolescence: We had been cheated of our actual adolescence. While most of our heterosexual peers had experienced, in their teens, socialization around courtship, dating and sexuality, many of us had grown up closeted and fearful, “our most precious and tender feelings rarely validated or reflected back to us by our families and communities,” as Alan Downs, the author of “The Velvet Rage: Overcoming the Pain of Growing Up Gay in a Straight Man’s World,” puts it. When we managed to express our sexuality, the experience often came booby-trapped with secrecy, manipulation or debilitating shame.

Also telling their stories are a couple of young guys who’ve already been gay-married and divorced.

George was still struggling to understand where his marriage went wrong. He met his ex four years ago, when George was 22 and living what he called “a carefree post-college life” in Northern California. George said he wasn’t looking for a serious relationship, but he fell in love with his ex (who was several years older) after meeting him through mutual friends.

“At the time I was thinking, Wow, I really wish I had met you eight years from now,” George recalled. “But I met him when I met him, and I wanted to be with him. I knew I had a lot of growing up to do if I wanted to make the relationship work, and I did. I grew up pretty fast.”

The couple registered as domestic partners in California (partly for the health insurance) and then moved to Massachusetts a year later, where they were married in 2006 in front of a couple hundred people in a church in the suburb where George was raised. Most of the attendees were family members and friends — some of his ex’s extended family, George said, weren’t supportive of the marriage.

“And in a million other ways we were constantly reminded that our relationship wasn’t equal to a straight relationship, even though we were legally married,” George told me. “Whether it was doing our federal taxes, or hearing that most states weren’t going to recognize our marriage, or just not being able to walk down the street and hold hands without getting snickers or comments. Like many gay couples, I think we brought unresolved shame and deep-rooted feelings of unworthiness into the relationship. You don’t even realize it’s there sometimes, but it definitely affected us.”

And as usual, Dan Savage has the most sensible take on the phenomenon of young married gays:

Dan Savage, the sex-advice columnist, told me he worried that some young gay men in Massachusetts might rush into marriage as a way to have their relationships validated by their families. “Once, our relationships were only respected if we had remained together for a long, long time,” Savage said. “Only longevity earned us some modicum of respect. Straight couples could always rush that validity by getting married. Now I just worry that some gay kids, desperate to have their gay love taken seriously, will wield their new marriage licenses and say: ‘See how real our love is? We’ve only been together five months, but we’re already married. You better respect us now!’ ”