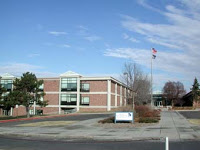 So much for the wingnuts keeping their kids at home today. Instead, these jokers in Nebraska took it to the school.

A small group of anti-gay demonstrators who showed up at Lincoln East High School Friday morning prompted 10 to 15 students to stage their own protest, with one student running through a banner that said “homosexuality is a sin.”

The event allowed students to be silent during times when they were not in class to bring awareness to acts of harassment against gay, lesbian, bi-sexual and transgender students. Thompson said three or four adults carried anti-gay posters in a public park south of the school. He said more than a dozen students then began protesting the adults. The school sent administration and security staff to ensure nothing happened. The school didn’t suspend anyone and the incident was over by shortly after 8 a.m., Thompson said.