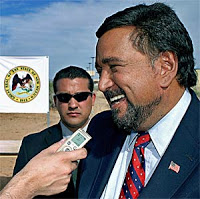 Why Richardson Said “No” To Hillary Bill Richardson has explained his decision to endorse Barack Obama, saying that the Clinton campaign’s clumsy efforts to woo him to their side “really ticked me off.”

Before he endorsed Barack Obama, before he drew the wrath of the Clintons and was likened to Judas, New Mexico Gov. Bill Richardson nearly endorsed Hillary Rodham Clinton for president.

But Richardson hesitated, and as the Democratic campaign turned ugly, he grew angry. There was that “3 a.m.” TV ad, in which Clinton questioned Obama’s personal mettle. “That upset me,” Richardson said.

There were some ham-fisted phone calls from Clinton backers, who questioned Richardson’s honor and suggested that the governor, who served in President Clinton’s Cabinet, owed Hillary Clinton his support. “That really ticked me off,” Richardson said.

Still, even as he moved from Clinton toward Obama — “the pursuit was pretty relentless on both sides” — Richardson wrestled with the question of loyalty. After 14 years in Congress and a measure of fame as an international troubleshooter, Richardson was named Clinton’s U.N. ambassador, then Energy secretary: “two important appointments,” Richardson said.

He finally concluded that he had settled his debt to the former president: He had worked for Clinton’s election in 1992, helped pass the North American Free Trade Agreement as part of his administration, stood by him during the Monica S. Lewinsky sex scandal, and rounded up votes to fight impeachment.

“I was loyal,” Richardson said during an extended conversation over breakfast this week at the governor’s mansion in Santa Fe. “But I don’t think that loyalty is transferable to his wife. . . . You don’t transfer loyalty to a dynasty.”

Richardson says he was close to endorsing Hillary after watching the superbowl at his governor’s mansion with Bill. But he denies Bill’s allegation that he had pledged to at least remain neutral, saying, “Sometimes people hear what they want to hear.”