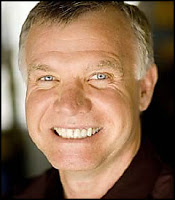 Gay activist Tim Gill has got the Christian right positively shaking in their pews.

Gill, the wealthy founder of software giant Quark who was recently named the fifth most influential gay person in America by Out Magazine, was “exposed” by Pat Robertson’s Christian Broadcast Network this week as the “stealth” activist behind many recent advances for the LGBT movement in state and local elections across the nation. Gill’s good work, while no secret to gay activists, had apparently operated far below the Christian right’s radar until now.

But in the CBN feature story bookended by Robertson’s commentary, the exposé almost reads more like a love letter to Gill than a condemnation. Go watch the CBN video clip as “family values” strategists describe Gill as brilliant and smart as they tick off the campaigns in which Gill quietly funneled money to gay-friendly candidates and upended right-wingers. Through his Gill Action Fund, Gill helped win dozens of state and local elections for our side – all done while remaining largely unknown to beleaguered Republicans.

One of Gill’s 2004 targets was Ray Martinez of Fort Collins, Colorado. As the three-time Republican mayor of this Republican leaning area, Martinez thought he had a great shot at winning a state senate seat. Martinez told CBN News “the odds looked very good. The polling we saw was very favorable.” But in the last few weeks of the campaign, Martinez got hit with an avalanche of media attacking his personal character and pro-life stance.

“We didn’t know who was funding it,” Martinez said. “We heard rumors of their names, but we could never find their names and we couldn’t expose those because they were buried in a barrage of paperwork.” Martinez had raised over $300,000 – more than enough he thought to win Fort Collins. But several published reports show Gill and various associates had poured close to $1 million into the race through ‘527’ political organizations.

By taking out Martinez and other Republicans, Gill helped Democrats seize control of Colorado’s statehouse for the first time in 30 years. The result? A slew of gay-friendly laws that redefine the family in Colorado.

Today, pro-family lawmakers in the Rocky Mountain state say the “Gill factor” is impossible to ignore. State representative and Minority Whip Cory Gardner says “it puts extreme pressure on people who are trying to make a living at work and trying to raise money for a campaign who don’t have deep pockets.”

In 2005, Gill started the Gill Action Fund. The fund’s mission is “securing equal opportunity for all people, regardless of sexual orientation or gender expression.” The next year, the fund’s success rocked the political world. According to several published reports, it orchestrated donations worth $15 million to Gill’s favored candidates and causes.

The payoff this time was wins in 50 of 70 targeted campaigns and power changes in the state chambers of Michigan, Pennsylvania, Washington, and Iowa. Gill took out Iowa House Speaker Danny Carroll with one of his favorite stealth tactics: small checks from Gill and friends around the country. Carroll says he never knew what hit him until after the election when he checked campaign contributions for his opponent.

The clip ends with a shot of parents pushing their kids on a swingset as the narrator ominously warns that Tim Gill is looking to “flip statehouse chambers and ultimately, the way the country views sexuality and the family.” I spoke with Gill on the phone yesterday and he laughed at that image, saying, “They’re trying to say that I’m anti-swingset!”

Pat Robertson closes with this: “What are the Christians doing about this? The answer is ‘absolutely zip’. There was an organization that I founded but it’s not there anymore. To my knowledge, there is no other Christian grassroots organization that is even coming CLOSE to what Tim Gill is doing on the left for homosexuals.”

And that, my friends, is high praise indeed.