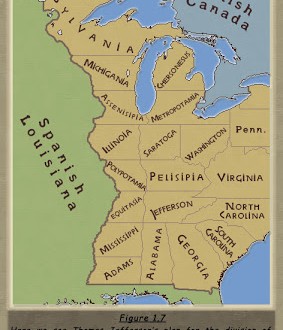 There’s A Lot Of Ruin In Metropotamia I was cruising around Strange Maps and found this February post about Thomas Jefferson’s rejected plan on dividing the Northwest Territory into ten states. Jefferson’s names were rejected as “too silly.” Some factoids about the never-were states:

• Sylvania would have covered much of present-day Minnesota, Michigan’s Upper Peninsula and some of northern Wisconsin.
• Michigania would have incorporated most of Wisconsin, but nothing of Michigan.
• Most of Michigan’s Lower Peninsula would have been the state of Chersonesus, which is simply the Greek word for ‘peninsula’.
• The northern part of modern-day Illinois would have been the state of Assenispia, after the Assenisipi River, also known as the Rock River.
• In between Assenispia and Pennsylvania would be the state of Metropotamia, a name referring to the many rivers originating there.
• The states of Illinoia, Saratoga and Washington would have incorporated large parts of Illinois, Indiana and Ohio respectively.
• Polypotamia (‘Land of Many Rivers’) and Pelisipia would have covered the western and eastern parts of Kentucky, mainly (and therefore are partially outside the Northwest Territory, as it is bounded to the south by the Ohio River, Kentucky’s northern border).

Assenispia. How the school kids would have loved that.

Previous And The Overhead Bins Get More Crowded
Next Fur Break