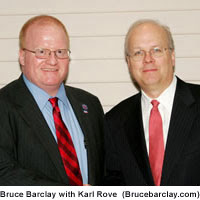 Our long wait (five minutes? six?) for the next Republican gay sex scandal is over. On March 31st, Republican commissioner of Cumberland County, Pennsylvania, Bruce Barclay was accused of man rape. But home videos have surfaced proving that the sex was consensual, even though Barclay’s partner was unaware he was being taped. And neither were the hundreds of other men that Barclay taped in his home and office.

For days, Bruce Barclay’s political career hung in the balance. The Republican commissioner of Cumberland County, Pennsylvania, had been accused of rape — by a man, no less — and the police were bearing down. Barclay’s lawyer issued a strong denial (“This accusation of rape is ludicrous It will be defended forever and is wrong.”). But it was clear things were looking pretty dicey. Until… vindication! Well, sort of.

On March 31st, police, investigating the allegation of rape by the 20-year old Marshall McCurdy, obtained a warrant to search Barclay’s home. They didn’t find evidence of rape. But they did find videotapes of hundreds of sexual encounters with men that Barclay had filmed on high-tech surveillance cameras. The cameras were hidden inside AM/FM radios, motion detectors and intercom speaker systems, among other places. There was also one at his business office.

None of the subjects were aware they were being filmed and no permission had been obtained, Barclay admitted. According to a second warrant issued on April 9th, Barclay also admitted to hiring prostitutes on a weekly basis from the now-defunct website harrisburgfratboys.com.

On April 10th, the rape charges were dropped. One of the videos found during the search showed Barclay and McCurdy engaging in apparently consensual sex. As his lawyer put it:

“It is clear in my client’s private life he has made an error of judgment. What is striking is this very same lack of judgment exonerates him from a rape allegation that wasn’t going anywhere.”

Sadly, his vindication was his undoing. Barclay was forced to resign.

And legally, Barclay’s not quite out of the woods yet– he’s still facing possible charges for privacy violations and promoting prostitution. McCurdy, however, has been charged with making false reports to law enforcement authorities and unsworn falsifications to authorities. He’s up for a possible 3-year prison stint and $7,500 in fines.

Man, Republicans get so much gay ass, it’s almost enough to make you wanna switch. Almost.