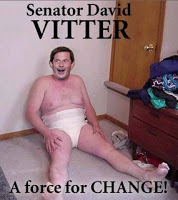 David Vitter (the married, family values, hooker hiring, gay marriage ban voting, diaper fetishist Republican Senator from Louisiana) may be called to testify on behalf of the madam accused on running a DC-based prostitution ring. Deborah Palfrey is accused of racketeering and money-laundering.

Also on Palfrey’s witness list is Harlan Ullman, the military strategist who came up with the “shock & awe” tactic used in the invasion of Iraq. Lawyers are expected to walk witnesses through some “embarrassing and graphic personal details” of their encounters with the ladies in Palfrey’s employ.

Vitter has admitted his patronage of Palfrey’s hookers, but has ducked all questions regarding the specifics of his appointments, although his hired ladies have not been so discreet, revealing the Senator’s fondness for diaper play. Let’s hope we get to hear the story in Vitter’s own humiliated words. “Senatoh needs a new die-pee, Mommy.”