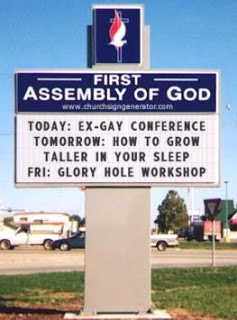 The Self-Loathing National Tour!!!
Only The Delusional May Attend!!!
(Also: Must Love Jeebus) A traveling national conference billed as an event “to provide help for those struggling – and those whose loved ones struggle – with unwanted same-sex attractions,” drew about 700 people to a Mountain View church on Saturday.

The gathering at the evangelical Christian church, Abundant Life Christian Fellowship, also drew a small protest by members of the Bay Area’s gay and lesbian community incensed by the conference topic, the longstanding controversy on whether gays can be “converted” – or turned into so-called “ex-gays” through a Christian “step out” program.

It was the first time that Love Won Out, a 10-year-old traveling conference sponsored by Focus on the Family, an evangelical group based in Colorado Springs, Colo., was held in the South Bay. Inside the church, there were conference sessions on “Understanding Male Homosexuality,” “Hope For Those Who Struggle,” and “Straight Thinking on Gay Marriage.”

“Christians want to know how to respond to a loved one who is living homosexually,” said Melissa Fryrear, director of gender issues for Focus on the Family. Fryrear was one of the keynote speakers at the conference and recounted her personal story as “someone who lived homosexually for a decade.”

After counseling and the help of Exodus International, a group whose mission is helping gays “to overcome homosexuality,” Fryrear said, she “began to step out of homosexuality.”

“We hope people who came will walk away with an understanding of this issue from a theological and Christian perspective,” she said. Anthony Jones, a church minister from the Pearly Grove Baptist Church in Fresno, said he came to learn to improve his ministry. “I’m hoping to learn approaches on how to minister to homosexuals,” he said, “to know and understand what their lifestyle is. We’re not saying you’re going to hell for being a homosexual. We want to embrace them and love them but understand the sin of same-sex attraction.”

Wayne Besen, executive director of Truth Wins Out, a New York City-based non-profit that tracks the “ex-gay” issue, led the protest of about 25 gay men and lesbians outside the church. “It’s false advertising,” said Besen, author of a book, Anything But Straight: Unmasking the Scandals and Lies Behind the Ex-Gay Myth. “There’s no one there who’s going to be ex-gay,” he said. Joyce Rogers stood on the sidewalk holding a hand-lettered sign that said, “Homophobia: Now that’s a choice.” Another sign said, “Science! Not Stereotypes.”

BELOW: Truth Wins Out protests outside the conference. Photo via The Gaytheist Agenda.